How Oscar Wilde saved my Life. 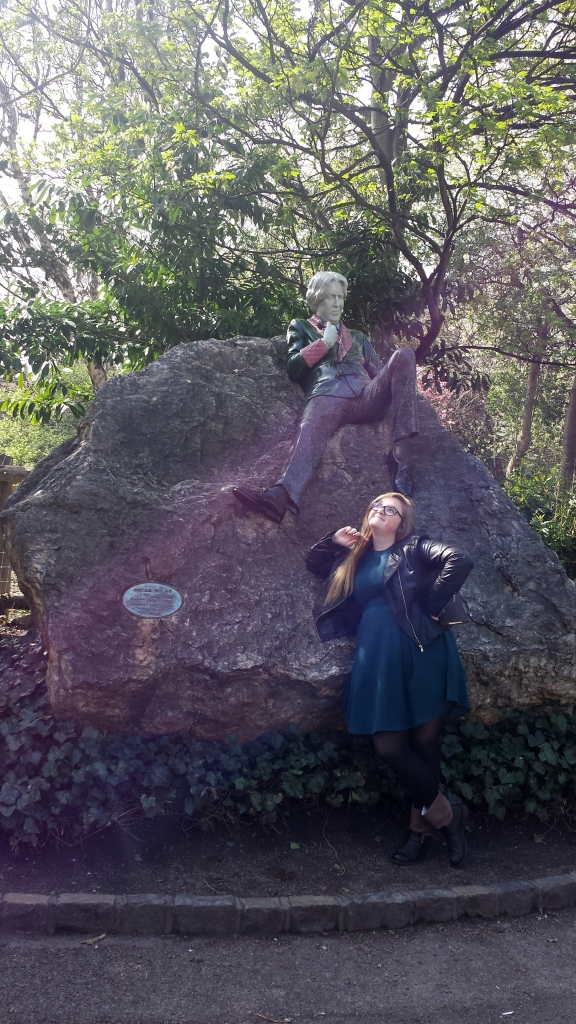 I’d like to say that his statue came to life, and carried me to safety after nearly drowning in a pond- but it’s much simpler, and far less fanciful, than that. Oscar Wilde’s words, whether they were the fairy tales that seemed strangely familiar, or the poetry that cut deeper than any knife could, they managed to change my whole way of thinking.

I’d never been a huge fan of poetry. As a child, only the immortal words of Shel Silverstein’s Boa Constrictor ever catching my eye. I tried again during high school with Emily Bronte and Edgar Allen Poe, but for some reason nothing ever resonated with me. That is, until I was forced into doing a literature project on an influential figure (Thankfully of our own choosing); and I chose Oscar Wilde. Not because of his terribly witty plays, or masterpieces, such as The Picture of Dorian Gray– I chose Widle simply because he was Irish, for that simple fact always seemed to catch my eye.

My mother was born in Dublin, back in the 60’s; and when she was just a mere four years old, her ever growing family left the emerald isle in search of work, and a better life. They crossed the wild Atlantic seas, in a crowded room, in an even more crowded ship. My grandfather’s work as an electrician moving them from Canada, into the rural parts of New York, before eventually finding their way to Texas; where my mother met my father, and several failed proposals later, managed to spawn both my brother and myself.

Because of my mother’s upbringing, I’d always been engrossed with the idea of Ireland. Which led to me spending most of my childhood begging my grandma to tell me stories about their time there; transfixed by the idea of belonging to another part of the world.

I finally made my way to Ireland at the age of eight, and ever since then, there’s been no other place for me. I don’t know how to explain it to people who haven’t experienced it before, but finding the place where your heart settles, it’s both tragic and extraordinary. I’ve never felt right since.

Loving Wilde was a bit more like hard work. I didn’t know much about his life, and the further I delved into the world that was Oscar Wilde- the more I fell in love with him. It was Wilde’s poem about his sister, Requiescat, that did me in. Just the idea that this man had been so uncharacteristically different, and brilliant and extraordinary- but still experienced tragedy beyond measure. It killed me, and out of that gloom was born someone new. Someone with an appreciation for those that were different- who realized that I too had evolved into some strange creature. Oscar Wilde made me realize that not being exactly what the world wanted me to be was okay.

Nowadays, half of my bookshelf is filled with numerous editions of Wilde’s works. A battered copy of Lady Windermere’s Fan sits haphazardly on my desk, and a printed copy of Theocritus plastered on my wall. It seems that I’ve become a bit obsessed. But, who wouldn’t be obsessed with Oscar Wilde? This is the man who fought for my right as woman to wear pants. Where would I be if I couldn’t wear sweatpants everywhere I went?

My love for Ireland brought me to my love for Oscar Wilde. It forced it upon me much like a mother convinces her child to add an extra layer before going out into the cold; lovingly, but with no chance of convincing her otherwise.

Quick Facts:
Today, October 16th, is Oscar Wilde’s birthday.
My Favourite piece of poetry by Oscar Wilde: The Dole of the king’s Daughter.
Where to find out a bit more about Wilde’s life.

A short story of mine, about dreams, has been featured by an amazing writer, Ali Isaac, on her blog. You can go read my story here. I’ve always been extremely terrified about posting my own work, but Ali’s been far too kind about it. So, please go check it out!

4 Comments on “How Oscar Wilde saved my Life.”