A Nerd’s Guide to Travel

The reasons why people travel are endless. Some just want to get away for the weekend, others are trying to escape their past, and some are just following the footsteps of their favorite movies/books/television shows. I try to not let it influence every trip, but I’ve definitely visited a few select locations just because of my nerdier sensibilities.

This is my worst offense. 100% of the reason I wanted to see the Plaza de Espana in Seville is because of the 30 second scene in Star Wars Episode II: Attack of Clones. My love for the Skywalker family is no secret. When the prequels came out, I was around the ages of 7-11. Anakin Skywalker and Padme Amidala were my main role models during that time. My love for their relationship has not diminished over the years (nor has my love for their children, and the one angst-y grand child). I’m just glad my friend Catherine was willing to go through the motions with me and pretend to be my Anakin Skywalker for a few minutes. No matter how dumb it seems, it was totally worth it.

We all know about my feelings towards Paris, France (aka: I hate it), but there is a special part of Paris that I did enjoy visiting; and that was Disney Land. While some of the rides weren’t open, and the food was overpriced, any of the Disney locations are a nerd’s (like me) wonderland. Anything that has Princesses, Winnie the Pooh characters, and Indian Jones/Star Wars is my kind of place. Again, my friend Catherine gave up a full day in one of her favorite cities to run around a theme park with me, so she basically is the best. To be fair, it was one of my favorite Disney adventures, just because I could act like a complete dork the entire time.

To be fair, I didn’t know I was going to stop at Glenfinnan during my trip to Scotland in 2013 with my friend and her family, but when we did, my heart’s only desire was to see the Hogwarts Express roll by on the Viaduct. I don’t think we saw it cross the bridge, but we definitely saw a steam engine roll by us as we drove off. It was as magical as you’d expect. All of Scotland (and parts of Ireland) are riddled with glorious scenery from a multitude of movies, but Harry Potter holds a near-and-dear place in my heart. I’d go to Scotland for any reason, but to check out Harry Potter locations was a solid excuse my first time around.

I’ve talked before about my love for mythology before, but I don’t think I’ve written about the fact that the main reason I decided to study abroad in Rome was because of Roman/Greek mythology. Everywhere you go in Rome, and most of Italy, there are temples, shrines and statues dedicated to the Gods. I found myself becoming giddier and giddier with each one I found. My favorite Goddess in the Roman Pantheon is Diana. I too wish I was the Goddess of the Hunt, so I could spend my days running barefoot through the forest, chasing down trespassers with my hounds. My favorite spot for Diana in Rome was the Temple of Diana in the Villa Borghese. That and all the sculptures in the Capitoline Museums. It’s all just so good. I’ve spent a good amount of time studying and researching the various Pantheons of the Ancient world and am always excited when that knowledge is useful.

Thanks to my 7th Grade English teacher, I was very familiar with Oscar Wilde’s works and life by the time I visited Ireland again as a young adult. I wouldn’t say I’m obsessed with him, but I definitely look up to Oscar Wilde in a way I can’t when it comes to some of my other favorite authors. Wilde was ostracized, and horribly punished, for being Gay back in the 19th century. While I have not gone through as degrading and horrific an experience as Wilde did for not fitting in with the status quo, I understand his plight and admire his work for what it was: genius. So, anytime I’m in Dublin or Galway I always go by one of Oscar’s statues for a quick chat.

It’s said that the time J.R.R. Tolkien spent riding trains around Switzerland is where he got most of his inspiration for the world and geography of Middle Earth. While I like to argue some of that inspiration came from Ireland as well, I can’t help but understand Tolkien’s love for Switzerland; it’s also the main reason I visited The Greisinger Museum in Jenins, Switzerland. The museum is one of the largest, if not the largest, collection of Middle Earth paraphernalia in the world (from art to first editions of The Hobbit and The Lord of the Rings, to a massive sculpture of the dragon Smaug). To make it even better, it’s all housed within a to-scale Hobbit Hole (or smial for the detail orientated fans). Honestly, the few hours I spent within the collection were some of the best of my life. It was definitely worth spending most of my day on trains just to get there. I felt I got a bit of the Tolkien experience riding through the countryside. 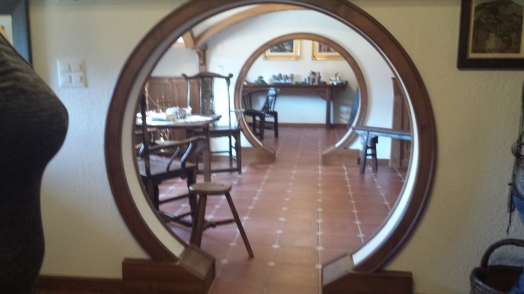 Basically, anywhere I go, I can find a nerdy reason to be there. Even when I was in Vancouver this past Spring, I realized all of the CW Superhero shows were filmed in the city, and so I found myself looking out for certain spots that I remembered seeing Supergirl or the Flash running through. I can always find something nerdy to latch on to, no matter where I am. It’s my super power.

What are some of the strangest reasons why you’ve visited a place? I know I’ve definitely got more nerdy-escapades locked somewhere in my memory.

← The Sun Hates Me
The Best Books to Travel With →

13 Comments on “A Nerd’s Guide to Travel”