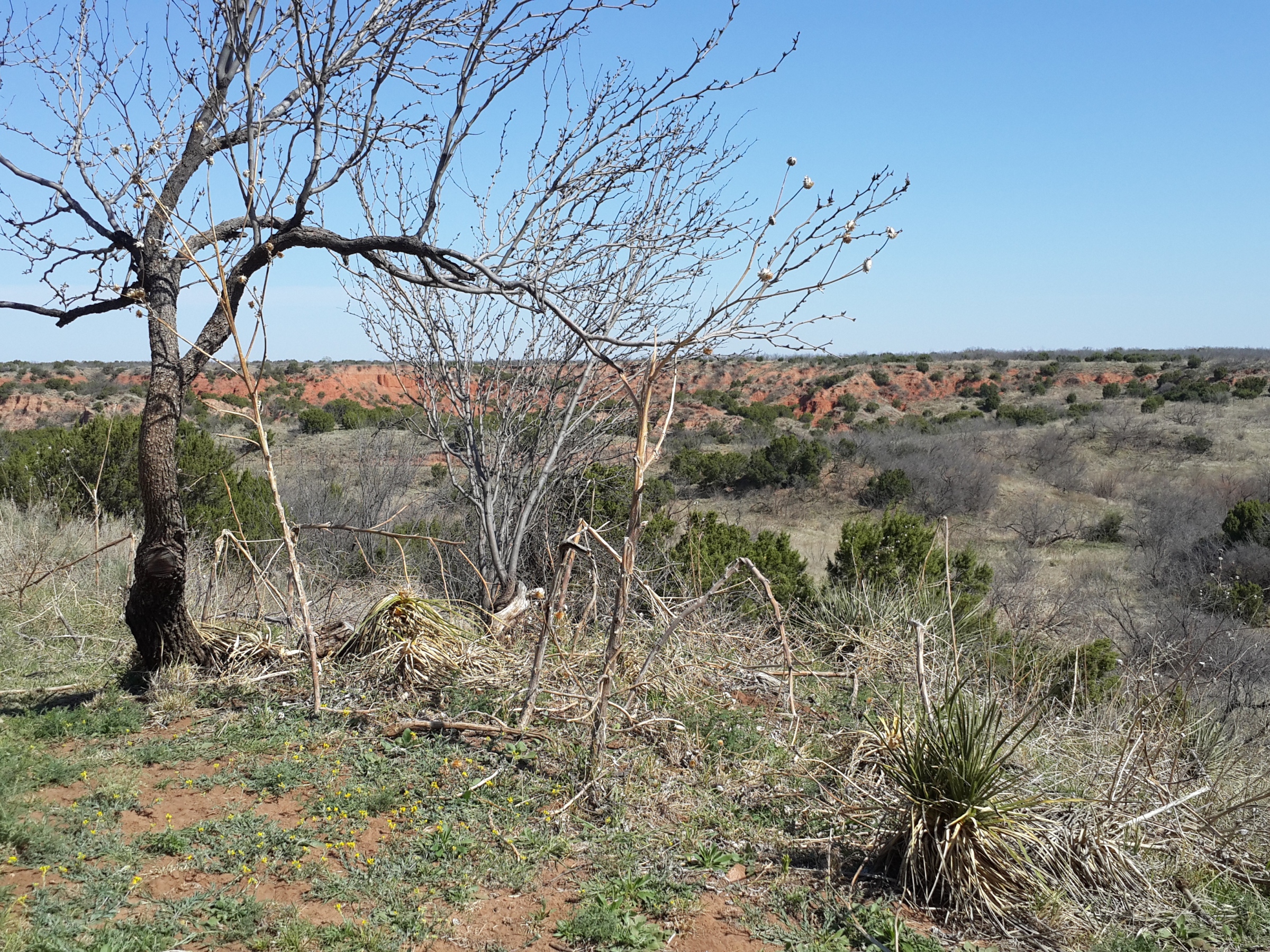 Back in March, during Spring Break, a friend and I visited Caprock Canyon, in Briscoe, Texas. The only other canyon I’ve ever visited is Palo Duro Canyon, but that was when I was eight years old, so Caprock is the first canyon I’ve been to that I can actively remember. It’s also the first canyon I’ve hiked in; which was an experience.

The first thing you see when you pull up the dusty drive is the Visitors Center. From here you get a small view of the sprawling red and green striped canyon walls. I’ve always thought that canyons are sparse, and dark brown and grey in color, so I was surprised by how colorful Caprock is. No words can do Caprock justice, so have some pictures instead!


According to the official Caprock Canyons Website, the canyon consists of 15,313.6 acres; on which, approximately 120 bison roam. The Native American history of this area of Texas is entwined with the history of the canyon. On the website they write:

The escarpment’s scenic canyons were home for Indians of several cultures, including the Folsom culture of more than 10,000 years ago. A decrease or disappearance of some species, from Folsom times to present, indicates a gradual drying and perhaps warming of the climate.

Bison are the main inhabitants (ie. most important) of Caprock. The first thing that the ranger told us, after greetings, was to steer clear of the Bison. Just like at Yellowstone, people are the worst things that can happen to the wild animals. We didn’t see any bison during the two hours we spent at the canyon, but we did see plenty of bison-poo.

Out of the 13 trails available, we decided to hike the Eagle Point Trail. It’s one of the easier trails, at 2 miles, but it still kicked my ass. I was not prepared, in the slightest, for the dehydration I encountered on the hike. I’ve hiked through the brush in the Highlands of Scotland, and I was always fine, because in Scotland there was no heat, and I was almost always hidden from the sun by either clouds or trees, but here, near the beginning of the Texas summer, I thought I was going to die: dehydrated and alone (because of course my friend would eventually leave me to die).

I also tripped in the sand about three different times. My poor, brightly colored shoes got destroyed by the pink sand. Here is a picture of the trail, and as you can see, it’s mainly sand, so regular sneakers are not great in this type of environment. If only I researched before I came. 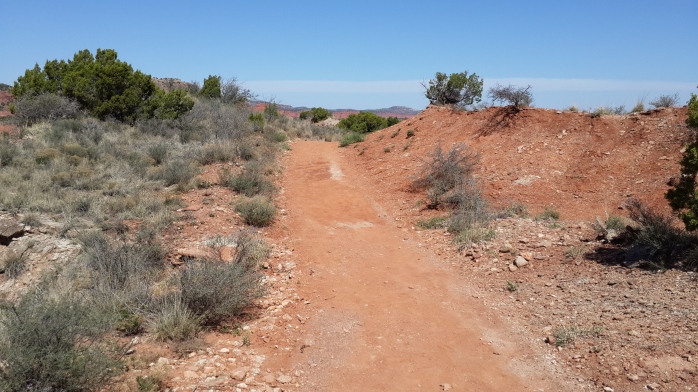 The trail wound up and down various hills, some stretching about 10 feet into the sky. The good thing about this was the views, and the bad thing was trying to pull myself up the steep, sand covered slopes. I also stopped every few feet to take photos with my dust covered phone. Plenty of European tourists, and bike riders passed us, but I didn’t care. I could not force myself to look away from the foliage, and the different shaped cacti that we ran across. I’ve never been so close to cacti before!

In the end, we only hiked about 3/4 of the way down the trail, before we (I) decided to head back. My water bottle was coated in sand, after my last fall, and I nearly cried when I finally spotted the tiny gate where we’d started our journey.

After the hike we ate a nice packed lunch on a small, wobbly wooden picnic table, that gave us a nice view of the blue lake. The camp ground around the lake was riddled with tiny tents, and families unpacking for a quick weekend trip. Thankfully, there was also a nice breeze blowing around the water, so it didn’t feel too hot. All in all, it was a nice trip, but would’ve been better if I’d actually prepared. Though, to be fair, we’d only decided to visit the morning before.

Have any of ya’ll been to Caprock, and tried out the other trails? Have a favorite hiking trip? Let me know in the comments below! I’d love to read about y’all’s experiences!

Hello again, all! I know it’s been awhile since I last posted, but I’m back! I’ve got a good amount of travel, literature, and entertainment posts hiding in my drafts– so expect those in the upcoming weeks!