A land of both ice and fire, Antarctica is known to harbor one of the harshest environments on Earth. It is the only continent to have zero permanent residents, as well as a treaty between over 53 countries. A treaty enacted to preserve the integrity and history of this lonely island. As stated by Jon Krakauer, “Antarctica has this mythic weight. It resides in the collective unconscious of so many people, and it makes this huge impact, just like outer space. It’s like going to the moon.“ 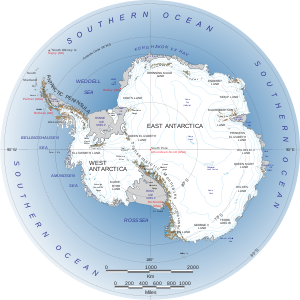 What makes Antarctica so precious? The ice. Below the frozen tundra lies millions of layers of Earth’s history. All stored away in an ice cocoon, to rest for eternity. (Or however long it takes for humanity to destroy the planet). This knowledge is mainly in the form of trapped CO2 bubbles within the ice sheets. Scientists can pull information about the past, such as temperatures and carbon levels in the atmosphere, from the ice cores taken from Antarctica.

There are 5,000 temporary residents of Antarctica. Most of these civilians live in bases around the continent. With the occasional expedition crew camping out in the Antarctic tundra and snow. The largest of these bases is McMurdo Station, the United States colony. The base is situated at the foot of Mt.Erebus. One of the most active volcanoes on the planet.

Mt.Erebus is home to some of the most unique ice caves on the planet. Because of the extremes in temperature the caves are always changing.

It is often difficult to see the lava lake bubbling within the massive crater (due to ice-fog and snow). When it is seen, the image is terrifying. As this lava lake is one of the most long-lived.

Erebus’ last eruption was in 2006. But is known for its persistent low-level activity. Erebus is also one of the most heavily researched volcanoes on the planet. Each summer the New Mexico Institute of Mining and Technology sends a team of scientists to live, and conduct research, on the rim of the volcano.

Antarctica is also home to one of the world’s most adorable creatures- Penguins! These wobbly little creatures only live in the Southern hemisphere; and out of the 17 species known, only 4 breed on Antarctica. While they spend 75% of their lives at sea, the time spent on land is for breeding. The colonies they inhabit when on land are called ‘rookeries’, and total about 180,000 birds.

Seals, whales, and a small group of other birds also inhabit the island (or it’s surrounding waters). But, most leave as soon as winter begins to drift the ice back to shore.

Expect a new post every month about Antarctica! It’s become a new obsession of mine. I’ve been watching every documentary I can get my hands on. And there are quite a few on Netflix.

2 Comments on “The Secrets of Antarctica (Part One)”